Bakk was a military dog serving in the US station in South Korea. And after long years of service, he was finally going home to the mainland with the help of American Humane, an organization committed to the safety, welfare, and well-being of animals. And his previous handler, TSgt. Dustin Cain of the United States Air Force adopted him.

TSgt. Dustin Cain had always loved dogs and as soon as he stepped into the Air Force, he wanted to be a military dog handler. He trained for the role before he was introduced to Bakk, a patient German Shepherd. The two surely had an instant connection and bonded so well. But it was just a year-long assignment and he knew he couldn’t be attached to him because he would just get heartbroken.

When he was stationed in Idaho, he had to leave Bakk but after around 11 months, the military dog needed to retire. He had been suffering from a torn ligament at 7 years old and while he wasn’t a candidate for surgery, he was a candidate for adoption. So Dustin immediately grabbed that chance.

There was a lot of press for this reunification and Dr. Lesa Staubus, a veterinarian at the American Humane drove Bakk all the way to Boise, Idaho. When he first entered the room,  Bakk’s eyes instantly lit up and he immediately recognized his handler. He jumped on him and got some pets from his new mom and brother Henry.

At first, Dustin was apprehensive about how Bakk would react to small children like his son. But when he saw how gently and calmly he approached him, all his worries faded away. For him, he just wanted to let this dog live a full life as a couch dog after working for so many years. He deserved that and the whole family was ready to give him all the love he needed. 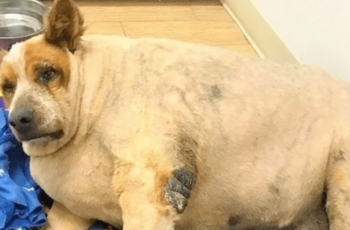 Obesity is a huge public health issue that affects both …

When you own a Golden Retriever, your days can go …