Lucky’s amazing story started when a woman living in a California neighborhood let her dog out to do his business. The pet refused to come back inside when his mom called out to him. When the dog owner tried to retrieve her pooch, she discovered a box with a litter of puppies near their fence. The puppies were so small, and it seemed that they were left out in the yard to die.

The lady talked to her neighbor, and that’s when she discovered that he was a backyard breeder. The litter was born just a few hours earlier, and the dog mom rejected them. As he couldn’t profit from those newborn pups anymore, the breeder decided to throw them away.

The runt of the litter

The woman asked her neighbor if she could take the newborn pups and give them to a friend who was a volunteer for a local rescue group. The breeder agreed. The lady then called her friend, a California resident and animal lover named Clanay Reza. She quickly agreed to foster them.

Sadly, most of the puppies died within the day, except for the litter of the runt. The newborn pup is an albino, and initially, it seemed to Clanay that he would have been the first one to perish. He was frail and so tiny. But amazingly, he survived the night.

Clanay gave the puppy, who she called Lucky, all her attention for the next several days. She made sure that the tiny pooch was fed. The devoted foster mom patiently used a syringe to feed him when he wouldn’t latch on to a bottle.

Two weeks after Lucky arrived, he started standing and walking around. This showed Clanay that the dog was a fighter. When he turned two months old, he gained a lot of progress. The foster mom was relieved that they had gotten over the worst part of his condition.

Lucky came across some obstacles along the way, but he continually showed that he could overcome them. Today, he is a lovable and cuddly pooch that loves to play and run around.

Because he is an Albino, Lucky needs to wear goggles and sunscreen when going out. But that doesn’t prevent him from being the happy dog that he is. 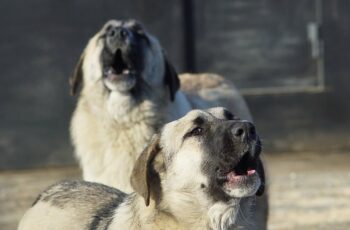 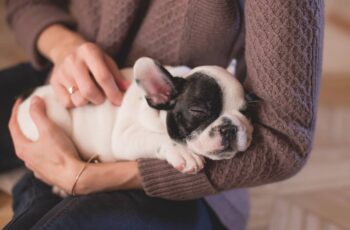