One of the most painful things for canine lovers is to see abandoned dogs on the streets.

As everybody knows, the streets are unsafe places for canines, not only because of the high chances of accidents but also because of the negative impact on their health. And on top of these things, these dogs have to endure the sadness of having no family and permanent home to live in every single day. But these dogs are not alone in enduring these pains, as their plight also hurts one goodhearted lady named Caitie Evers. That is why she did her part in helping them by deciding to save one of their kinds — an abandoned (and pregnant) Golden Retriever.

Caitie lives in Houston, Texas, and works as a full-time teacher. And aside from having a passion for teaching, she also loves taking care of dogs who are in great need. That is why since 2014, Catie has been pouring her time into saving abandoned dogs and has since saved 195 dogs and helped them find their forever families.

The kind-hearted woman’s latest rescue mission involves an abandoned and pregnant Golden Retriever. But this time, she won’t be giving this dog to anyone as she decided to make this Golden Retriever a part of her family.

Catie named the lovely dog Lily-Mae. And not only did Caitie give her a new home and a new life, but she also decided to celebrate Lily-Mae’s pregnancy by giving her a special maternity photoshoot. The Golden Retriever can be seen wearing a beautiful maternity gown and a tiara made out of flowers while holding her mom’s hands in their adorable photos.

Aside from celebrating her dog’s pregnancy, Caitie did the photoshoot to raise awareness about stray dogs and how important it is to help them. Through her photographer friend’s help, the photoshoot produced a lot of stunning photos that were well-received by netizens.

Three days after the photoshoot, Lily-Mae finally gave birth to eight gorgeous puppies! And as they now reach their fourth week, Caitie is preparing to put these healthy puppies or adoption so they can have their permanent families, too.

Indeed, Caitie has already done a lot of big things for dogs to make their lives better and be filled with love. And Lily-Mae is so lucky to have her as her permanent, loving mom. 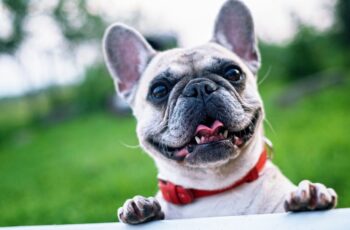